Triskelion ~An All British Aran Weight Yarn And Giveaway 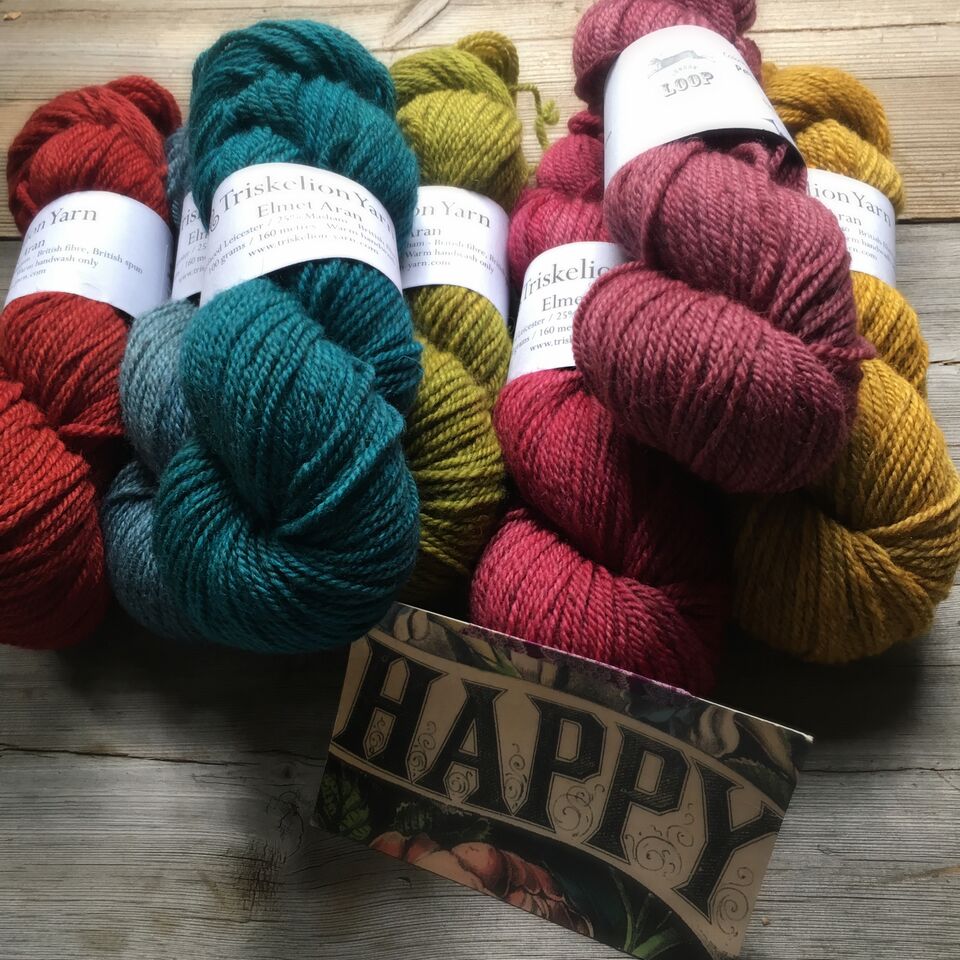 Loop has been looking for the ideal aran weight British yarn to add to our stock. Aran is a yarn weight that Britain should be good at producing as we have a tradition of outerwear guernseys and jumpers. We wanted a yarn that had a beautiful colour palette, was hard wearing but also soft to the touch, as many people have become accustomed to softer yarns.

We found the perfect yarn in  Triskelion Elmet Aran weight!  Triskelion, Elmet is a blend of British Bluefaced Leicester and Masham, that is kettle dyed in Wales. Every process, from sheep to shelf is British. We carry our own custom palette of 21 beautiful colours.

Elmet is 75% Bluefaced Leicester (BFL) / 25% Masham. The BFL is a British longwool, with a rich lustre that yields very bright and rich colours. While Masham is a dark brown fibre, that adds warmth to the colour ways. The Masham fibres are “rough blended”, to add an irregular dark heathering against the creamy BFL, which adds a lot of depth to the colours.

The finished blend is glossy and smooth with a little bit of a slick handle, and yet still hard-wearing, crisp and springy. Sweaters made in Elmet won’t pill like Merino!

The yarns come from British sheep, are spun in the UK and Hand-dyed by Caerthan Wrack in rural Wales.

Caerthan (pronounced CAR-than, with a soft th, as in thought) lives in very rural hills in Carmarthenshire with his partner Rick, Gwen (their border collie/site manager), Herbert (farm cat/chief mouser/layabout), and a small herd of alpacas.

They have a tiny, traditional Welsh cottage on a small farm of pasture and woodland, with a big barn attached.

Most of the dyeing is kettle dyeing, with a mix of induction hobs and bain maries. So, a lot of heavy lifting!

The exclusive Loop palette is a combination of old and new dye recipes. There are older, mature colour ways such as  ‘Sloe’ and some new, fresh faces like ‘Vincent’s Clouds’ and ‘Anvil’.

There are also beautiful neutrals and greys which can be used on their own, or to coordinate with the more vibrant colourways.

Each 100g skein has 160 metres and can be used with most aran weight patterns. Check the yarn put up (grams to metres/yards) If a yarn falls within 130-200m per 100g it will probably be suitable. Make sure to do a gauge swatch and adjust needle size accordingly.

We will choose two lucky winners to announce on Friday September 15th. Good luck. We hope you love Triskelion Elmet Aran as much as we do!