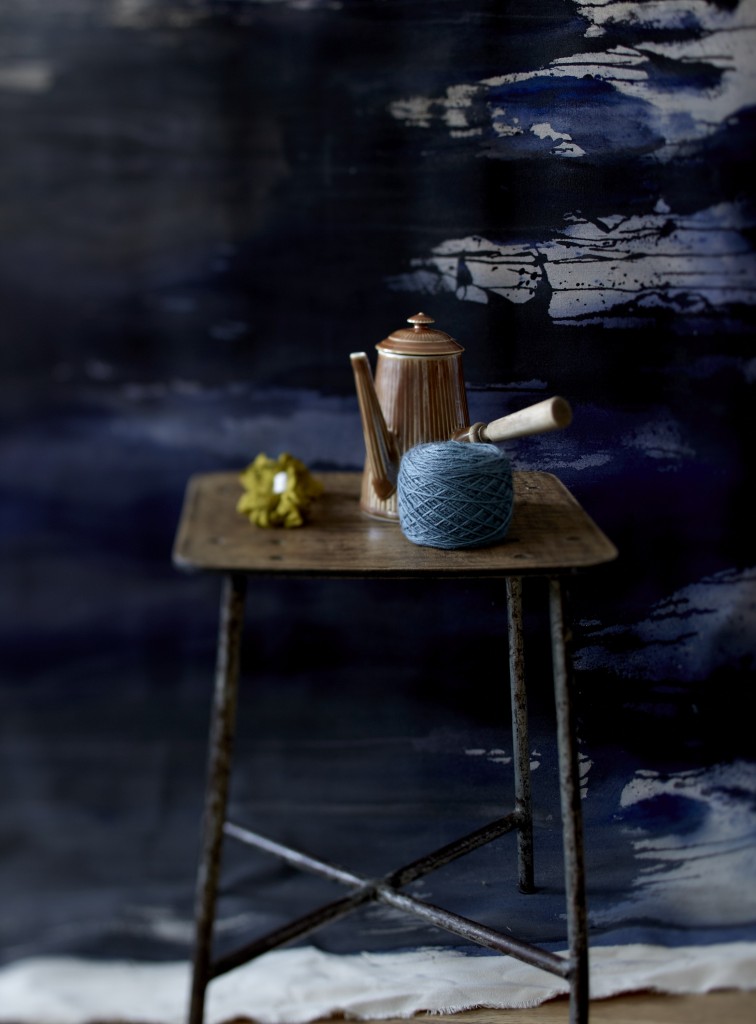 Two wonderful creatives, both based in Scotland, are the focus for this anniversary post. Our tenth anniversary book (due for release in September) will include the work of talented knitting designer Ysolda Teague and feature the most beautiful blue, created by Lilith of Old Maiden Aunt.

We love Ysolda’s patterns – wearable knits that are suitable for everyday, with elegant details and clever techniques. We had a chat to find out what we can expect from her design this time…

Hi Ysolda! Tell us a little bit about yourself and your role in the wooly world

I’m an independent knitting pattern designer based in Edinburgh. My work focuses on knitterly designs that are both appealing to wear and to make — it’s such a slow craft that I think the process is as important as the final outcome. As my business grows I’m trying to find more ways to support the many small businesses that form the vital backbone of our industry. This year I launched my first yarn club and it’s been amazing both to work with small yarn producers and to stoke knitters’ interest in the story behind the materials they work with, something I know has always been important to Loop.

What was your initial plan for the design?

They were much more elaborate! My original sketch involved ribs, cables, lace AND bobbles. As so often happens the design process involved editing things down until I was left with the most important elements. It turned out that overly elaborate stitch work fought with the yarn, which has a beautiful bloom if you give it some space.

What can we expect from the mitts?

The design is quite simple with strong architectural lines using ribbing at the cuff that’s gradually consumed by strips of stockinette outlined in yarn overs that diagonally traverse the back of the hand. The thumb gusset shaping is worked as a single line of yarn overs that traces the lines on the palm of the hand. I love to find ways to combine stitch pattern details and shaping that follows the contours of the body.

Tell us a little more about working with Old Maiden Aunt for this project and why you think it suits your pattern?

Lilith, the woman whose hands bring you every skein of Old Maiden Aunt yarn, was one of the first dyers I ever worked with and my admiration for her mastery of colour has only grown over the years. Her layered colourways are anchored in the Scottish landscape, weather and light, at once familiar and surprising. It’s always a treat to work with her on a project, and for this one she created a colourway that’s both subtle and intense fully showing off the depth of the blend of sheen and halo of the fibres. By combining strong areas of relief and openwork my design adds to those layers, so that different areas reflect light differently showing the full range of colour and texture in the yarn.

What Loop yarn would you chose if you had free rein of the shop?

Free rein? I think you’re underestimating the amount of yarn I could carry if I was really determined. Quince and Co Sparrow for a summer top, Brooklyn Tweed Shelter for a cosy jumper, The Uncommon Thread for a luscious shawl… I could go on and on, but if I could really only choose one it would have to be Old Maiden Aunt in Dreich, a colourway that truly makes me appreciate the Scottish weather more.

What does ‘Loop’ mean to you?

Loop and my design career are almost exactly the same age, I published my first pattern in 2005 on Knitty.com. I’d spend hours on Knitty and other websites reading about all of the exciting new yarn stores, with their gorgeous displays, active communities and workshops for fashionable projects, and their impossibly far off locations for a teenage girl in Scotland. Even though, at that point, I’d been to London once on a school trip, discovering that one of this new breed of wool shops had opened there was thrilling. I couldn’t wait to visit! As I began to publish more patterns and books Susan was one of my first and most active supporters featuring my wee book Whimsical Little Knits in its own display and placing frequent reorders — I think in the first year Loop sold more copies than every other shop put together.

Several years ago I found myself with an unexpectedly long layover at Gatwick, unable to even check in and camp out in a coffee shop airside. Usually a day with no plans in London would be full of possibilities but after a long journey and lots of teaching I was exhausted and just wanted to curl up with my knitting at home. I don’t remember considering any option other than heading to Loop, where I spent several hours curled up with my knitting, perfectly at home.

As she mentioned, Ysolda’s design uses Old Maiden Aunt in the delightfully soft alpaca silk blend we carry. Lilith’s likens her colourways to songs and explains that the tones and shades should all should work together, “the same way a good mixtape should”.  So of course, we had to find out more about the mastermind behind these gorgeous colours… over to Lilith of Old Maiden Aunt. 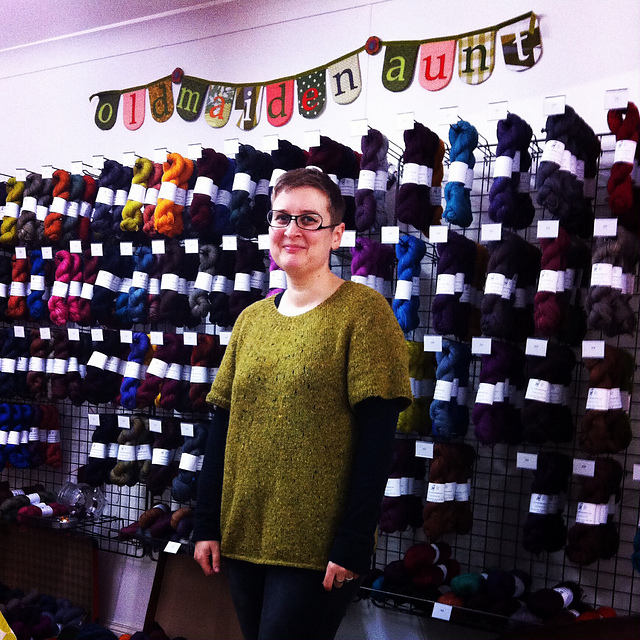 Hi Lilith! How did Old Maiden Aunt and your interest in knitting start?

In roughly 2006, a friend got really interested in knitting, and dragged me along with her to the Glasgow knitting group. I wasn’t a knitter at the time – I had learned the basics in the Brownies, but hadn’t kept it up, so just picked up something random at John Lewis to take along to keep my friend company at her first knit night! I ended up completely hooked, and started exploring other fibre related crafts, which led me first to spinning, then dyeing. I absolutely loved the process of dyeing, and was soon producing more yarn than I could ever reasonably use myself, so thought I’d start posting it online (initially, just photos on my blog) to see what other knitters thought of it. It became obvious that there was a good market for what I was making, and that I should set up a proper online shop to start selling my yarns, so I officially set up Old Maiden Aunt Yarns in January 2007. Not too long after that, Loop became interested in my yarn, and I soon needed to take studio premises to keep up with demand! In all honesty, I think it would be accurate to say that I accidentally started a business – and thankfully, it’s continued to grow!! Dyeing yarn is now my full-time job, and I’m very lucky to be able to do this for a living.

What was your inspiration for the colour?

Susan sent me a couple of swatches of colourway ideas in the green/blue/teal spectrum, and I began there. I was mainly inspired by Loop’s location – I’m a fan of Neil Gaiman’s “Neverwhere”, and liked the idea of a dark, mysterious colourway inspired by The Angel Islington; the colourway is also inspired by the shade used for The Angel Islington on a UK Monopoly board. I think it also fits in nicely with Loop’s overall aesthetic – there is a very distinctive style and colour palette in the website and shop, and I wanted to mesh my own colour style with this.

Any plans to knit some of your own projects in this colour?

Definitely, I’m really pleased with how it turned out! I tend to knit in finer yarns, though, so I may well dye a sneaky batch of one of my 4plys or laceweights up in this colourway…. (shhhh!)

If you could chose one yarn that Loop stocks (other than your own!) what would it be?

I’m a big fan of The Uncommon Thread – Ce’s colourways are just gorgeous. I also really love the quirkiness of Habu yarns – they’re lovely knitted up into light, layering pieces, great for a Scottish summer!

Thanks Lilth! Our custom colourway ‘The Angel Islington’ will be available to purchase in September along with all the other exclusive shades and our new book – we are certainly getting very excited and hope you are too!